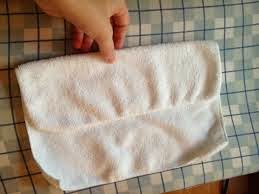 I was ready for my bath so I went to the linen closet for my towel and wash rag. As I looked at the neatly stacked linen, I spotted some old friends: an old dark brown towel and its wash rag. Unlike the others, they were friends for I had used them many times before. They had often caressed and refreshed my body. Like my faithful wife, they were considerably faded and their threads were coming loose and hanging around.

As I bathed I noticed that in places the old wash rag was not as soft and pliable as the new wash clothes, but there wasn’t that annoying tag with all the instructions and lawyer’s warnings on it. It was just itself doing what it was meant to do. Although every now and then the loose thread would come loose and call attention to the fact that it was coming apart because of its years of diligent service.

Although my wife doesn’t favor it because “Its just not so pretty anymore.” She likes the newer and prettier ones better. They give us a more prosperous look to any guests that may visit for a day or so. I guess its because I always want to get my money’s worth, but I like to use the old wash rag, for its still got a lot of use left in it. And I don’t have to think of the inflated price that the new ones cost with the newer and higher sales tax (for better schools, I’m told) tacked on.

Even though my old wash rag is faded, yet it still has a lot more of its color than some of the newer ones a tenth its age. Maybe its because it was made and dyed in the good old USA and not in some foreign land in cheap factories with their cheap materials and sobbing children laboring to give higher profits to greedy governments and corporations. Yes, this old wash rag is still firm showing better stuff than others that have worn until they’re cheese clothe thin (I wonder where they were made?).

You may be getting bored listening to such prattle about my old wash rag, but if you’re as mature as I am you may have guessed why it is so attractive to me. Its because I can see me in it. I identify myself with it..

What a contrast there is between seniors and youth. The most youthful, like a baby, are so very attractive because they are all potential. They have such beautiful POSSIBLE futures. One can enjoy dreams upon dreams of what youth and new things MIGHT become. Dreams are castles in the sky. There’s just no end to what they might become. They’re wagons looking for stars to hook on. But alas, so many just crash! What a great pity that such great hopes so often crash and youth destroys itself in sin, ruinous drugs, and even suicide.

Seniors, like my old wash rag have possibly much less future, but have experienced much more fulfillment. They have earned their place of honor, for if memory testifies their youthful potential has been fulfilled in service to others and to God their Creator.

One last reason I like that old wash rag: while others are ready to throw it away for the newer and prettier. Like so many seniors, it still can serve as it always has. The key to its enduring usefulness is its basic construction. Seniors who continue their usefulness have been made of the right stuff. As the Bible speaks of the godly: “The righteous shall flourish like a palm tree, . . . They shall still bear fruit in old age; they shall be fresh and flourishing, . . . “ Psalm 92:12, 14 (NKJ). Many of history’s outstanding men have done their crowning work in their latter life, in their golden years.

Email ThisBlogThis!Share to TwitterShare to FacebookShare to Pinterest
Labels: testimony