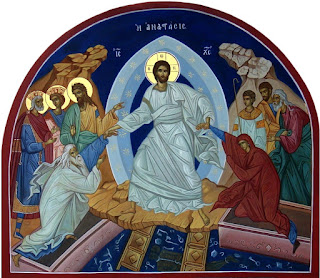 Christ is risen from the dead, trampling down death by death. And upon those in the tombs bestowing Life!

Jesus is risen from the dead as was foretold concerning the Righteous Ruler, the Messiah. He is risen! Hallelujah!

Email ThisBlogThis!Share to TwitterShare to FacebookShare to Pinterest
Labels: Holidays, the Resurrection 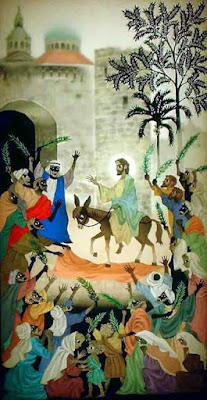 In Bible times, the King was greeted with palm fronds and olive branches by the residents of Jerusalem. This was the custom of the Jebusites who controlled Jerusalem before the time of David. Even today, fresh palm tree fronds are used ceremonially at the installation of Ijebu rulers and to decorate places of worship. Jude Adebo Adeleye Ogunade writes in his memoir about growing up Ijebu. He was warned not to touch the leaves of the Igi-Ose tree because, as his Mama Eleni explained, "That tree is the tree whose leaves are used to install Chiefs and Kings of Ijebu and as your grandfather was a custodian of the rites of chieftaincy and kingship you must not play with its leaves."

The University of Oxford, Institute Paper, n° 7, (1937) on "Medicinal Plants" lists the leaves of the Igi-Ose as a blood purifier.

In ancient Israel the Judean nut palms were stripped of many branches for the Jewish festival of Tabernacles or Booths (Sukkot). Branches were cut to make roofing for the booths. The palm branches also were used to thatch the roofs of homes and sheep cotes, to create canopies over open market spaces, and for ceremonies like weddings, etc. They were used so extensively that the Judean date nut palms disappeared from the Jordan valley.

There are efforts to bring back the Judean nut palm. In 2005, Dr. Elaine Solowey germinated a 2000-year seed that had been recovered decades earlier from an archaeological excavation at the fortified high place Masada. The so-called "Methuselah Tree" is growing in a protected environment at a laboratory in Jerusalem. Genetic tests indicate that Methuselah is closely related to an ancient variety of date palm from Egypt known as Hayany. The ancient flora and fauna of the Jordan Valley and the Nile Valley are similar.

The Methuselah date palm is now producing dates. These are the kind of palm branches that would have been used to hail King Jesus as he entered Jerusalem.