The Establishment of a Religion


The First Amendment guarantees freedoms concerning religion, expression, assembly, and the right to petition. It forbids Congress from both promoting one religion over others and also restricting an individual’s religious practices. It guarantees freedom of expression by prohibiting Congress from restricting the press or the rights of individuals to speak freely. It also guarantees the right of citizens to assemble peaceably and to petition their government. 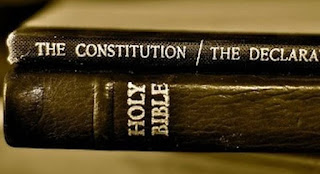 The First Amendment prohibits Congress to establish a national religion. Our founding fathers knew that the establishment of a religion meant the adoption of a specific Church as the required religious affiliation for their citizens. This was what they hoped to avoid, given the numerous conflicts that arose from this arrangement. In an established religion tensions arise because of these conditions:


When I served in the Army at our barracks at the old Dachau prison camp in West Germany, a notable warning was emblazoned in the camp. It said: “If we forget history, we are bound to repeat it!” Early in our history some colonies attempted to establish a religious: Massachusetts, Rhode Island, Maryland and Pennsylvania are examples.

The basic premise of the Declaration of Independence from England acknowledges the Creator as the Giver of “inalienable rights” which no State can rightfully take from its citizens. In the Constitutional Congress, the delegates were at an impasse and near giving up when Benjamin Franklin exhorted them to pray. Then, differences were overcome and the writing of Constitution was finished. To this day, congressional sessions begin with prayer. Even the Supreme Court begins its sessions with an invocation to God.

In 2014, the Supreme Court upheld the right upheld the tradition of offering prayers to open government meetings. In a case involving the town of Greece, New York, the justices ruled by a narrow margin that opening local government meetings with sectarian prayers doesn't violate the Establishment Clause. The Court decided the town was using prayer for "permissible ceremonial purposes" and not as an "unconstitutional establishment of religion."

Thomas Jefferson required the teaching of the Bible in the DC schools even though he authored the worn out phrase “a wall of separation between Church and State!” Though Jefferson's "Bible" has no miracles, it is clear that he recognized the existence of the Judeo-Christian God.

George Washington read the Scriptures and prayed the daily office of the Book of Common Prayer. While at Valley Forge, on 3 August 1776, General Washington issued this warning against taking God's name in vain.

The General is sorry to be informed that the foolish and wicked practice of profane cursing and swearing, a vice hitherto little known in our American Army is growing into fashion. He hopes that the officers will, by example as well as influence, endeavor to check it and that both they and the men will reflect that we can little hope of the blessing of Heaven on our army if we insult it by our impiety and folly. Added to this it is a vice so mean and low without any temptation that every man of sense and character detests and despises it.


In contemporary American society there are numerous organizations that hope to remove such expressions of faith from the national memory. The Humanist Manifesto seeks to remove God from public conversation. This infringes on the Constitutional rights of "theists" and proposes a view of humanity quite foreign to that of our Founding Fathers; namely that "Humans are an integral part of nature, the result of unguided evolutionary change." If that is true, it is futile to speak of "inalienable rights."

Related reading: Six Supreme Court Decisions that Would Have Been Different Without Justice Scalia

Posted by Alice C. Linsley at 8:25 AM No comments: