Discipling One By One 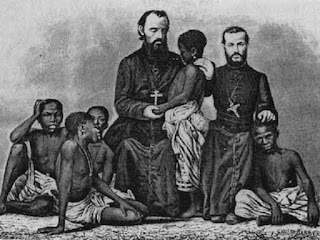 Discipling for the Church is to be a worldwide activity that focuses on the individual. This is in obedience to our Lord's command: to go and make disciples of all the peoples. I have used the word "peoples" instead of "nations" for two reasons.

From antiquity through the 16th century rulers and kings determined the religion of their subjects.   The word “nations" (KJV, NKJB, NASB, NIV) is therefore somewhat misleading. Nation is a modern concept, that is, the word has connotation that does not apply to the Great Commandment.

The stress should be placed instead on “all the peoples”as the focus of disciple making, and these disciples are called out ones. They are chosen out of people groups. This harmonizes with the Greek meaning of Church: ekklēsía (from 1537 /ek, "out from and to" and 2564 /kaléō, "to call"), people "called out from" the world and to God and into His eternal kingdom.

While God works with nations, such as Israel and with churches as groups, in the final analysis spiritual responsibility rests with each individual. Further, His commission extends to every human being. Discipleship is a personal affair because the one making disciples reproduces himself. Such reproduction is more than bringing the individual to pray the Sinner's Prayer or even to spiritual rebirth. The disciple maker cooperates with the Triune God in the rebuilding of personalities into His image and usefulness (Rom 8:28, 29; 12:1, 2; 2 Cor 5:15, 17). The Apostle Paul explains this impartation of one’s own spiritual life this way:


“But we proved to be gentle among you, as a nursing mother tenderly cares for her own children. Having thus a fond affection for you, we were well pleased to impart to you not only the gospel of God but also our own lives, because you had become very dear to us.. . . 11. just as you know how we were exhorting and encouraging and imploring each one of you as a father would his own children,” (1 Thessalonians 2:7, 8, 11 NASB)


I have been a missionary and ministered God’s Word half way around the world. My concern is that mass methods without personal discipleship rarely lead to multiplication. Discipleship involves compassionate multiplication through one–to–one reproduction, through small groups where there is commitment to the individuals present, and through the ministry of the local church. Discipleship of this more personal nature also often parallels the efforts of the Christian nationals who tend not to use mass methods.

Related reading: The Process of Salvation; The Grammar of Discipleship; The Importance of Follow-up in Discipleship

Posted by Alice C. Linsley at 8:03 AM No comments:

See what God can do!


“The Savior is working mightily among men, every day He is invisibly persuading numbers of people all over the world, both within and beyond the Greek-speaking world, to accept His faith and be obedient to His teaching. Can anyone, in the face of all this, still doubt that He has risen and lives, or rather that He is Himself the Life?” St. Athanasius (AD 298 – 373), from his treatise "On the Incarnation"

This is a partial view of the 5800 people who gathered in Frankfort to pray for our nation and for the Commonwealth of Kentucky on May 4. There was no more room on the Capitol steps so people crowded onto the grass on both sides. At least 129 people accepted Jesus Christ as their personal Savior, making a first time profession of faith. 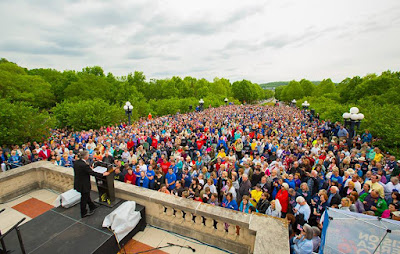 The following towns and cities were represented:

Christians from many traditions attended, including:

There were many young people in the crowd and among the volunteers. It was a joy to watch the Lord gather people to pray as one flock under one Shepherd!

Over 120 volunteers gathered in the sanctuary of St. Peter's Anglican Church to listen to a message from Steve Rhoads, Vice President of the Billy Graham Evangelistic Association. He reminded us that the Gospel has power to save, and he spoke on Hebrews 4:14-16:

Seeing then that we have a great high priest, that is passed into the heavens, Jesus the Son of God, let us hold fast our profession. For we have not an high priest which cannot be touched with the feeling of our infirmities; but was in all points tempted like as we are, yet without sin. Let us therefore come boldly unto the throne of grace, that we may obtain mercy, and find grace to help in time of need.

Meanwhile downstairs in the Fellowship Hall, the good folks of St. Peter's were providing hospitality to the volunteers, welcoming them with smiles and offering them fruit, pastries, juice, water and fresh coffee. This was greatly appreciated by the volunteers and Billy Graham staff, some of whom had been up since 3:00 am. 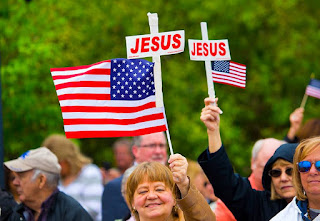 Many necessary tasks were accomplished with only about 36 days lead time because of the commitment of these people and the prayers of so many others.

Thanks also to our mother church, St. Andrew's Anglican Church in Versailles, for the support of that body and for sharing the expense of the two Port-o-Potties needed for all the volunteers. These were used by many rally attendees who otherwise would have had to stand in a long line on State Street.

I’m hoping this is an encouragement to every volunteer who has stepped forward to carry out their mission for the Lord as Franklin Graham carries out his commission from the Lord.

Thanks to all of you on staff and to the other volunteers everywhere.

I really felt so much love there and met so many nice people. It was such a blessing to be in a place where we all shared the same love and spirit. That of our concern for this country that we love and for the souls of all those who make up this great nation; the Spirit in each of us that yearns to see this country turn back to God who is our only hope.

It was an honor to be a volunteer at the Kentucky Decision America Prayer Rally. I was part of the Prayer group that walked around praying. About 11:15, I felt lead to stand on Capitol Avenue greeting folks. I asked the Lord for the privilege of praying with just one person. He provided that person, an elderly woman named Linda who attends a Christian - Disciples of Christ Church. Her husband dropped her off with two chairs and told her he would walk back to her after he found parking. She and I sat and talked for about 15 mins. She shared with me that she had fallen 20 times in the past couple of months and was having back and knee problems. I asked if I could pray for her and she agreed. After praying for healing, Linda said she felt heat going through her body. I continue to pray for Linda. Praise God for His love and healing touch!

As the crowd started to gather, there were smiles and fellowship from everyone. It made my heart smile to see everyone was there for our God!  A little elderly lady asked if she could have a few more flags to share with her church, which I obliged. Her smile… well it made the day brighter, all because she got flags from the rally to share with her church.

A man caught my attention. He was really struggling. God had led him to those steps.  He had tears in his eyes when the crowd started singing Amazing Grace. God, led me over to him. He pushed me away. Later, he came back to me. He grabbed my hand and said, “Thank you for what you did.”  I didn't feel I did anything.  I just offered him a hug and comfort. Sometimes it really is the little things…

The Father and I were talking about job assignments and if I had the opportunity to be a part of a prayer team, that's where I needed to be. Whelp, there was a prayer team! And our directions were to disperse yourselves and follow the Spirit's leading; we trust Him to show you where to be; follow Him and do what He says; stick to focusing on praying over everything since we have a team specifically for individual prayer, but obviously, if He leads, don't miss the opportunity! Score! My kind of directions!

Cut to the beginning of the rally: I'm up by the stage next to the speakers and I heard the Lord say to record it. So I quickly pulled out my phone and hit record.

Cut to the end of the rally: I finish with my volunteer duties. Everyone is basically gone. But I hear Him say to stay put. So I just stood in one spot for a while until I felt Him release me to head back up to the venue. I walked around the site for a bit, and eventually, I was the last one, just standing there praying until His Spirit released me. Then an elderly gentleman came walking by, without an umbrella in the rain, so I quickly ran over and offered to walk him where he needed to go. That's when he told me that through a miscommunication, his group had forgotten him this morning and so by the time he'd finally gotten to the rally (over a 3 hour drive!), it was over. Immediately, the Spirit reminded me of the recording! So I asked him if he would like to go inside the Capitol and listen to it. He was ecstatic! So we got inside and who did we have the blessing of running into but the Governor! After our conversation with him, we sat on a little marble bench and listened to the recording which turned out fantastic despite being so near the speakers! We prayed "with everyone" so he could join in! Then we did a little tour of the Capitol with its prayer room (second floor) before parting ways. What a blessing!! God is soooo good! And His ways are so wonderful! What a blessing to get to bless that man's day! Thank you Daddy for being such a good Daddy.  He surely loves to bless His children.